My Russian-language page is more informative. Switch into Russian

Since 2008 I have been an active fighter against the dangerous experiments, which were planned to perform at the Large Hadron Collider. In this regard, I was even given the title "Big Hadron Frick". The authors of Freakopedia had stolen some phrases from my web-site and published that at their pages. But my ideas were so hostile to modern religious scholars that "my information" in Freakopedia was destroyed by them. I was banned (forbidden) almost everywhere.

Now I understand that all this fuss around the Large Hadron Collider, most likely, was a big lie. This is similar to the six expeditions of the American Rambo-astronauts to the Moon, committed between 1969 and 1972. The whole world had swallowed this lie. The Soviet Union was shifted from the first place in the space exploration to the second step. Following this shift, our Union had lost its force in all other spheres. The goal was achieved. And more! Now our students continue to receive "the noodles onto their ears" about the space achievements of American Rambo astronauts.

So, were the Americans on the moon?

Most likely, they are there. Or rather their corpses. And who was there before? Our cosmonauts, or American?

It’s hard to tell. And it is unlikely that any country will admit that it sent suicide-volunteers to the Moon. This is unethical! But we need the knowledge. So, it is quite possible, that now, somewhere on the Moon surface there are several corpses. And thankfully to them we have some samples of lunar soil in our museums. In order to deliver those samples from the Moon surface, volunteers ought to take one-way tickets to the Moon, perform the task and die. The task of the suicide-volunteers was to pack a small rocket with lunar soil, shoot this missile to the near-Moon module, and die silently from exhaustion and radiation.

And what about the Large Hadron Noodles?

Citizens, I think you were saved! You were saved by Walter Wagner, Luis Sancho, Otto Rösler, Vasily Golota and others who spoke about the global danger of experiments at the LHC.

Those physicists, who are at the top of the chicken coop at last realized that experiments at the Large Hadron Collider could lead to the destruction of the planet. But instead of acknowledging their mistakes, they imitated and continue to imitate collisions at the collider. Collisions are “carried out” on the computer screen, and the entrance to the collider tunnel is strictly prohibited!

To confirm their Large Hadron Noodle, they even "discovered" the Higgs boson and gave the Nobel Prize.

So, dear student, do not think that you are a fool one, and you are the only person one who does not understand how this Higgs boson gives the mass to all other particles. I also do not accept this idea. It's just famously twisted spaghetti on our ears. In fact, everything in physics is much more interesting and reliable!

See, how the electron moves in our space-time! An electron does not just revolve around the nuclei. Your electrons are leaving your body billions of billions of times per second. Can you imagine? All your particles fly around the entire universe in a small fraction of a second many, many times. And they constantly flare up, materialize in your bodies. This conclusion is the consequence of quantum mechanics with its non-zero probability to detect your electron far beyond your body. The new look at Special Relativity also leads to this conclusion. Look here, please:

The explosion of the Earth is an unavoidable act of reproduction of life in the Universe.

Yes, dear reader. Exactly! The Earth is probably already doomed. Despite of our protests, the most "outstanding" physics of the world had already made the physical experiments, which start the collaptical explosion of the Earth. It is a slow process. It will last from 10 to 1000 years. The term depends of how much collapsars were created, and how quickly these microscopic collapsars would grow. It is very sad. But nothing can be done - it is necessary to live and enjoy the remaining years. We must pride in the fact that we, or our children, grandchildren will be the generation, who will bear the seeds of life in other star systems. All, of course, will die, but our DNA will be stored in cold comets. The simplest organisms can also experience metamorphosis. The eggs, pupae, larvae, worms will evolve into some sort of comet's creatures in the centers of the largest comets - giant foam spray the Earth's oceans.

It is a natural consequence. This is the law of the Space Genetics. Planetary civilization, which reached child-bearing age must blow up our planet, to give new life to the eternal Universe. In order to do that, the civilization should have genetically inherent desire to take risks, to develop a scientific dogma called the Big Bang. It is paradoxical, but the explosion of the Earth has been initiated with the purpose to check the truth of this vomit Big Bang. They did not prove anything. A dogma remained the dogma, but the Earth has already doomed to be torn into peaces. And what about the universe? Nothing! She is always eternally young! And the life is eternal in the Universe. There is no other way of reproduction of biospheres, except of explosive panspermia. The need for suicidal explosion has been developed in the Universe. This is the major gene in the living Universe.

This is not my picture. Perhaps its author is my good friend, supporter. 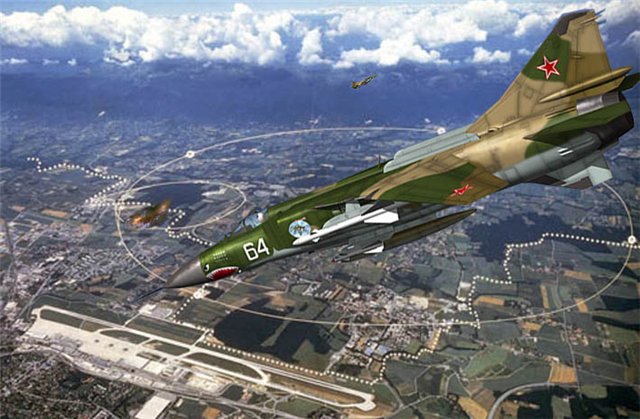 Citizens! Do not think that some good Uncle Ivan would come and destroy the CERN and its doomsday machine, LHC. Think yourself for your salvation. And not just think, but act. I have no flight experience, no money for the fighter and for a nuclear warhead to bomb the LHC....

To read more on this topic open the page Collider, News, Links.

There you can also find my recent inventions. For example, my VB-program SR2007.exe proves that the electron is not a point, but a string, embracing the whole Universe in a period, equal to electron's classic period.

And on the following figure you can see how it sews and stitches the space-time.

It would be useful to join the efforts and develop it further collectively, but contemporary physicists interested in another thing. They are trying to create things which will ruin our planet. At high-energy collisions of protons at CERN's collider the chromomagnetic field of nucleon, which is schematically shown on the following figure:

After a turn from (x, ict) rotations to (y, z) rotations and after the lost of lepton, the nucleon transforms from microscopic chromomagnetic hole into magnetic hole (boson):

which is a constituent part of a bigger magnetic hole (ferromagnetic vacuum of Savidy):

As a result a Solar system can be transformed into something like this:

To read more on this topic open the page Collider, News, Links.

Reproduction of biospheres and civilizations.

Crude errors in the LHC safety documents. What will LHC give us, the particle of God, or magnetic trap of Devil?

Other topics of SPACE GENETICS

Steady State Models of the Universe and their Authors

Simplified introduction: In the picture you can see the simplified 2-d water model as good approximation to the 3-d model of Ever Young Universe. Ships full of holes, and in the ships there are pumps, spouting the water high up in the sky. Spouted water drops everywhere in the sea, like a rain...

Genetics of Space Conversions.
Definitions: Light and space are two sides of a coin. Today it shines; tomorrow it will be medium for another particle-perturbation on the space. One observer sees the light, the second observer, moving relatively the first, lives in that light and feels it or measures it as his space-time...

Stability of the Solar System

The Essence of Time & "Age" of Universe

The time is the set of quanta of time, flashes. The conventional age of Universe, as well as information, are constant. Did you understand? The Age of Universe is the same, many billion years ago, today, tomorrow, in a billion years, always: T=13.3 billion years. Is it possible?

Closed Universe. Some people don't understand closed geometry because of the impossibility of imagination of such world. In order to simplify such imagination, I decided to show here my method of imagination of closed three dimensional world in a successive set of pictures...

Computer picture of the closed Universe.

Solar Energy Sources and Bell's spaceship paradox. The expression for energy input, which the massive object receives as a result of absorption of material space-time...

The pages about The Gravithermal Coil, and Arc Effect.

The core of the Earth is overheated emptiness.

The abstract of a poster speech, which was presented at the conference Science & Future, Moscow, the April 2004: Russian Toroidal Matryoshka is the warm fusion engine of new type.

The following pages are obsolete but they can help to understand the Arc Effect:
Abstract,
Description,
Formula of Invention,
Gravi-geometric paradox,
Gravitational Mirror

You Are The God

Our Challenge Auto Run. If you are interested in auto runs, adventures, life within the hairbreadths of death, then you must opened this page. Our run Moscow - Magadan - Moscow turned out to be heavier and much more dangerous than the famous Camel Trophy.